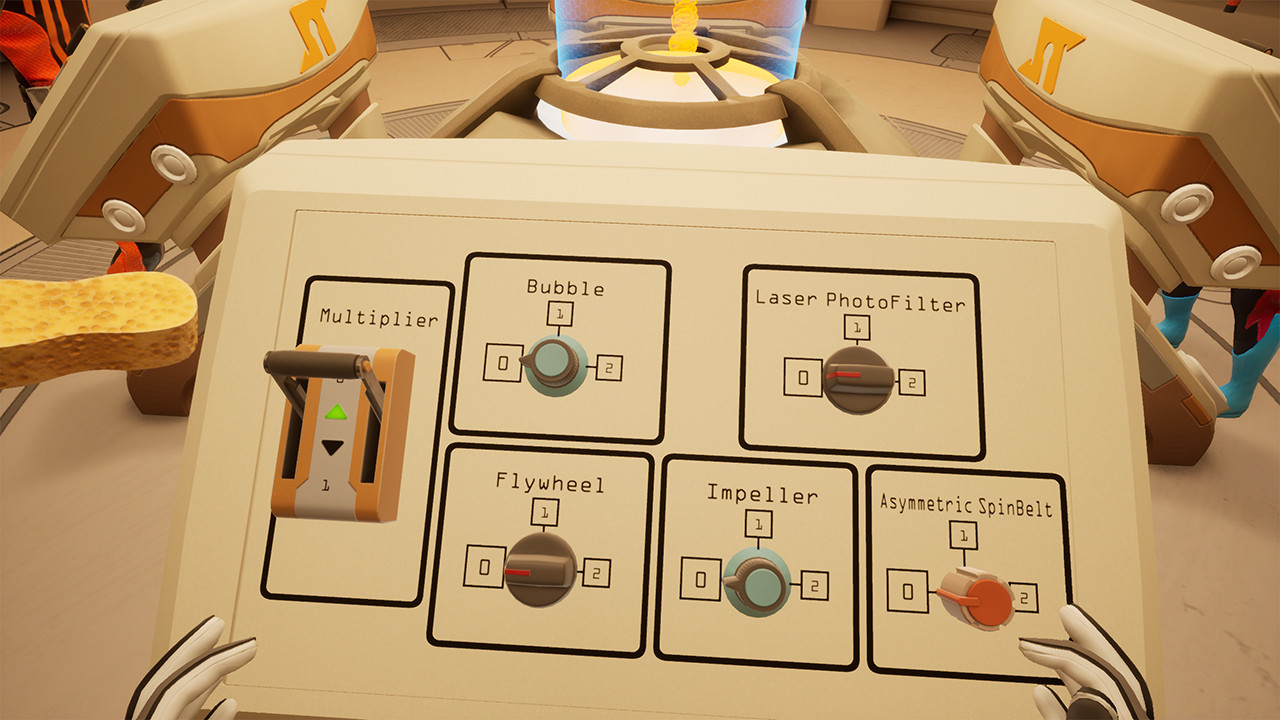 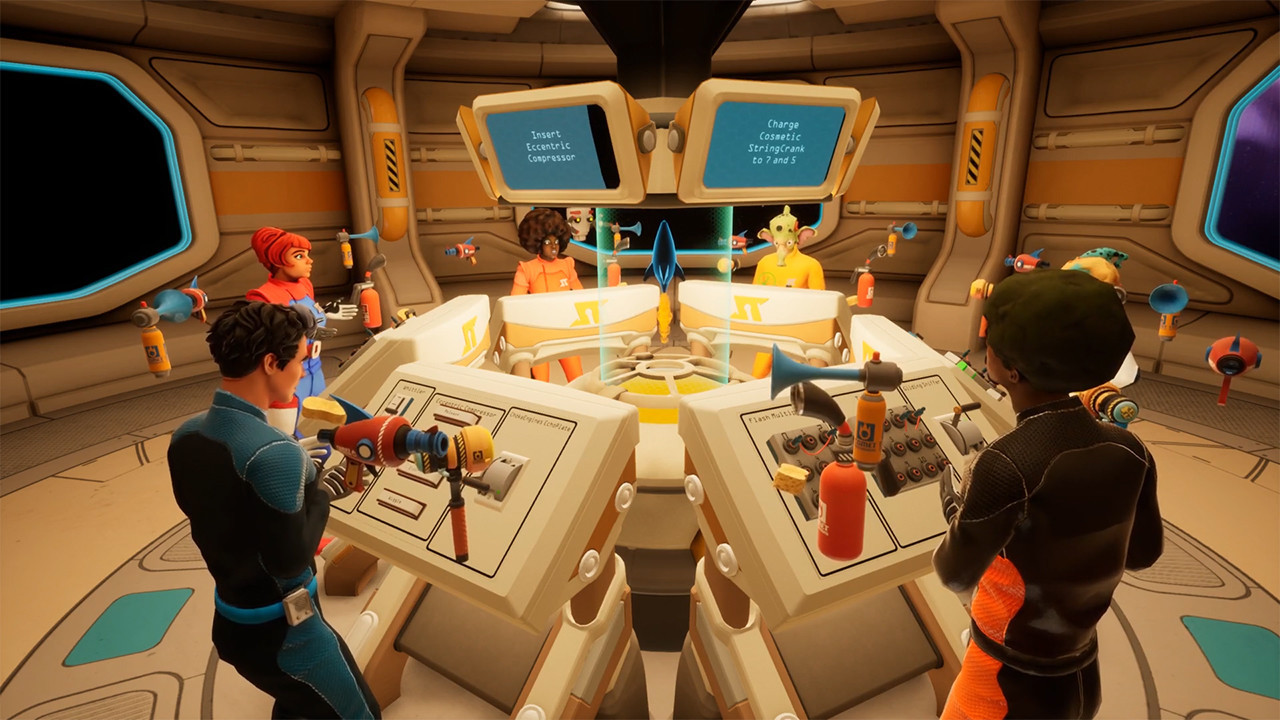 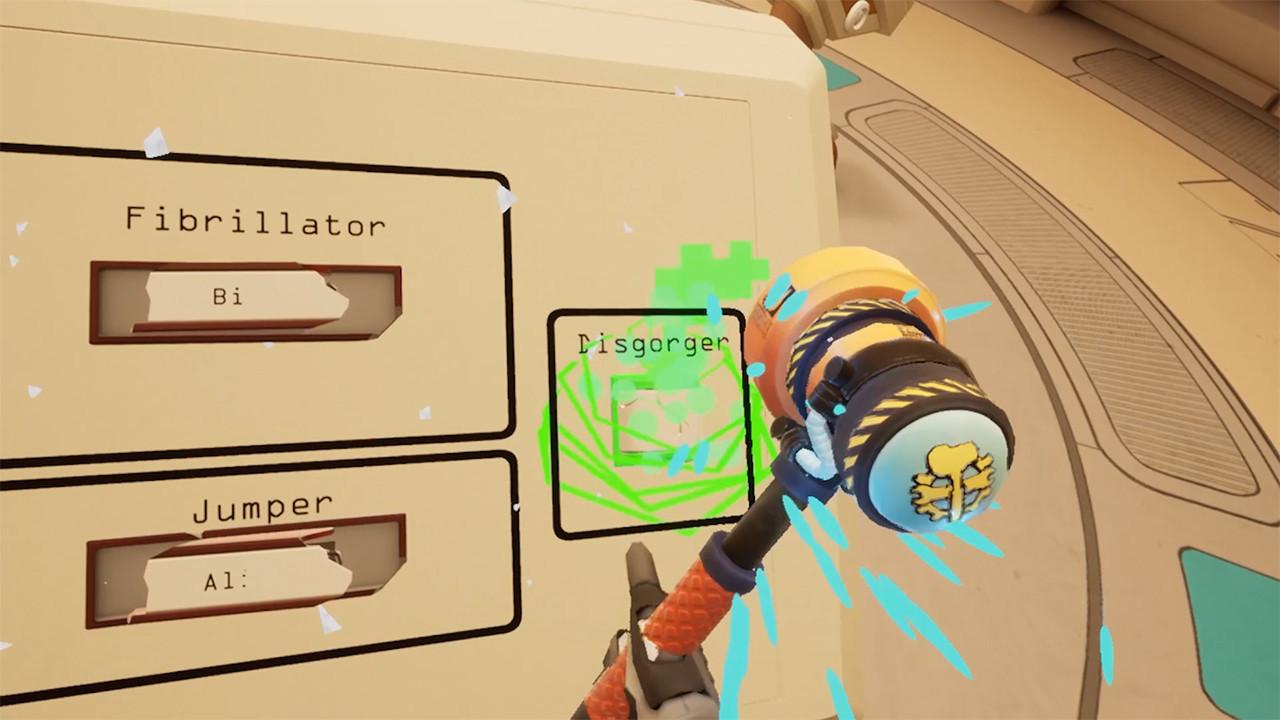 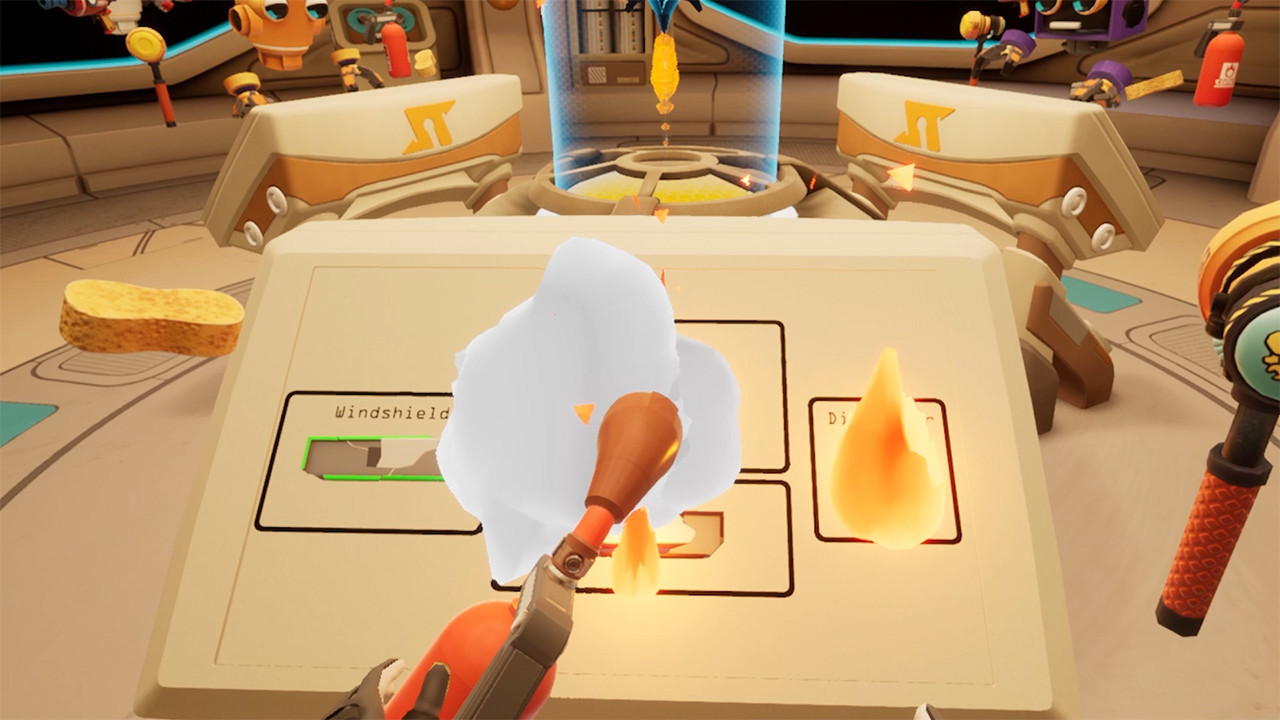 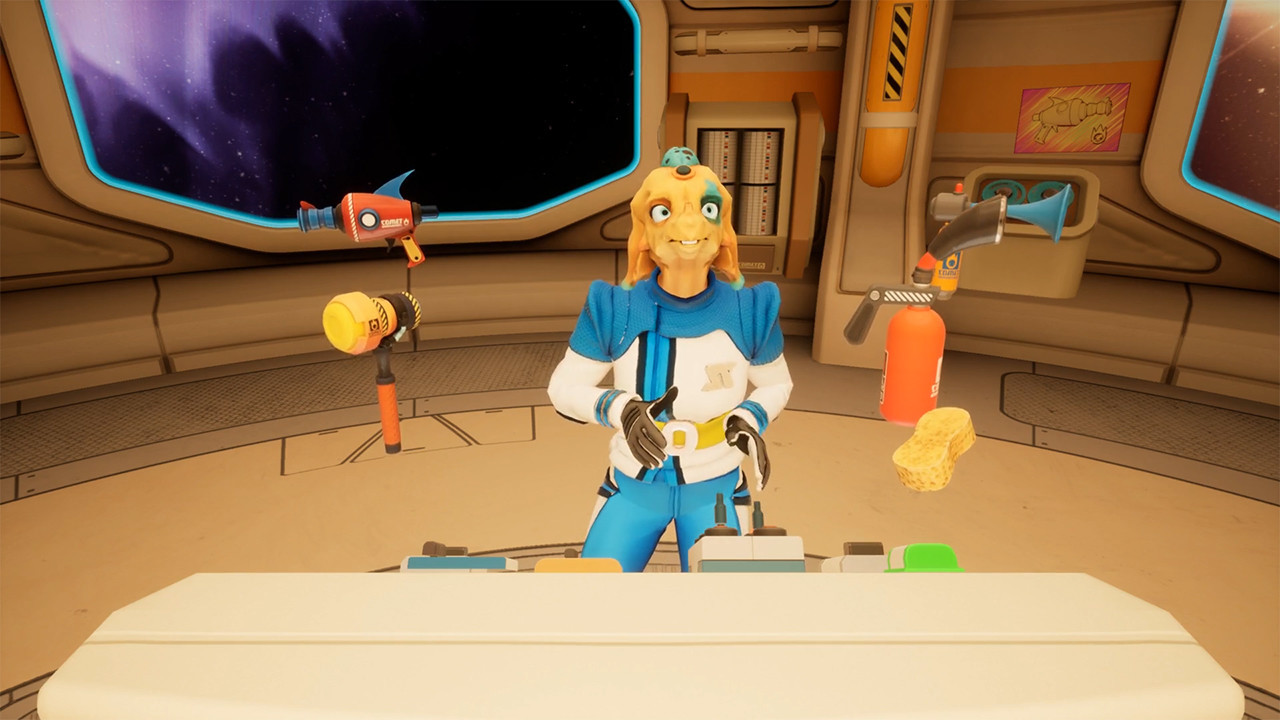 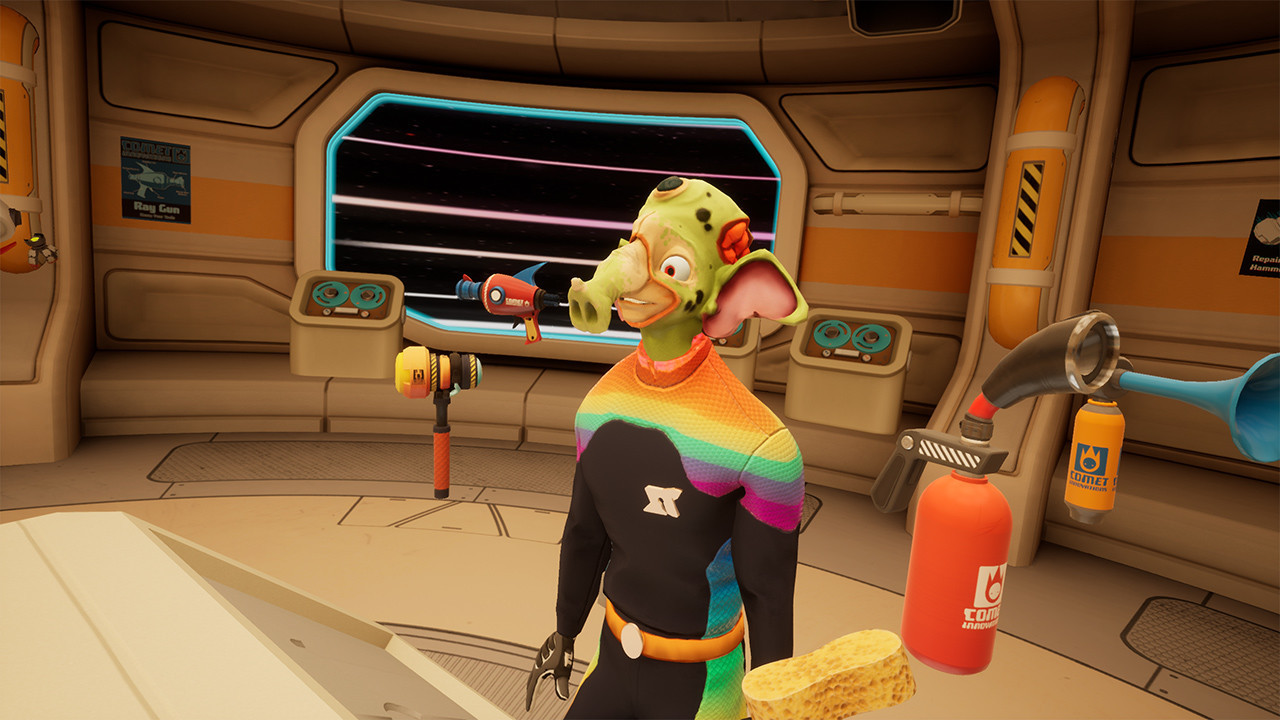 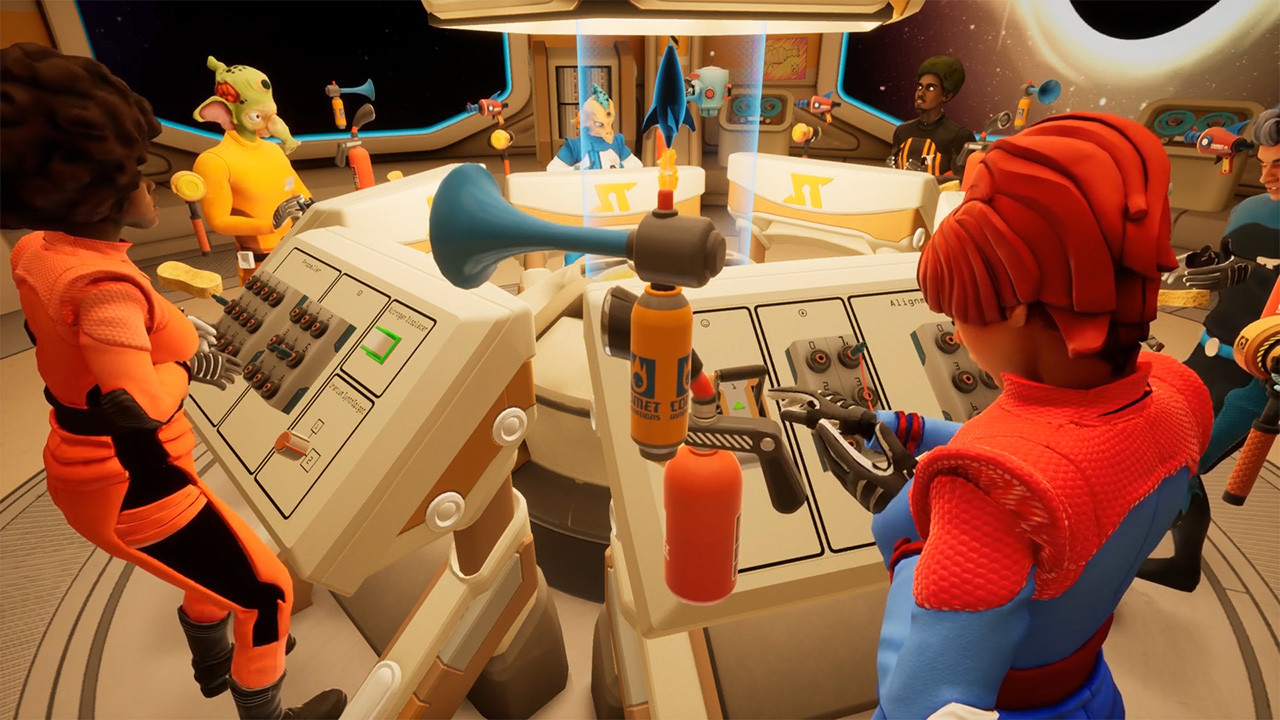 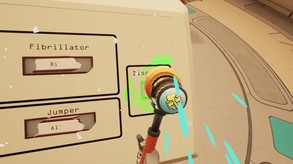 WORK TOGETHER AS A SPACETEAM

Assemble a team of up to six space cadets and work together communicating and completing increasingly complex instructions. Your spaceship has a few... eccentricities, that you need to work with, in order to stay out of the path of a nearby supernova. You need to navigate each Sector by reading the instructions that appear on the monitor above you and trying to complete them using the controls in front of you.

Each instruction is made up of a selection of nouns, verbs and symbols, which are put together randomly to produce humorous technobabble, such as
"Pump Inducer", "Release Debris", "Activate Ship Wiper" or "Set ???? to 7". There are hundreds of possible combinations.

Each instruction you receive either applies to a Control on the console in front of you or a Control on another player’s console. If you don’t have it on your console, you need to communicate the instruction with your Spaceteam. It is vital that each instruction gets completed within a certain amount of time. If you accidentally press a Control that isn’t related to a current instruction, they might break and become inoperable.

A hologram in the center of the ship shows the ship traveling through space – you can see the nearby supernova chasing it. If the players complete enough instructions successfully in a Sector they progress to the next Sector, each sector becomes increasingly difficult and as the ship takes on damage in each sector, it becomes harder to control and eventually, inevitably, you will explode as the supernova collides with it.

Floating within arms reach to your right and left are your trusty tools which will, hopefully, help you to deal with the myriad of threats and anomalies that take place onboard the ship.


YOUR ENEMIES
Space is a very dangerous place and anomalies often pop up in every sector. Adding to your workload and bringing your inexorable doom ever closer. Some of the anomalies you may encounters are:

UFOs
Small flying saucers appear at the outer edges of the play area and shoot at player’s controls, setting them on fire. Player’s use their ray guns to shoot back!
Slimes
Floating green alien monsters who spit goop onto player’s consoles, players need to wipe the goop up with the sponge and shoot the Slimes down with their ray guns.

The robots that live on the ship are friendly and try to be helpful. They are responsive to players – if you wave at them, they wave back, and don’t take kindly to being shot at. They play games with each other and explore the ship at their leisure during down-time.

There are three ways to play Spaceteam VR:

FULL VR MULTIPLAYER
Up to six players, connected to the internet, in any popular VR headset join in a cooperative game of trying to avoid their binding doom.

MOBILE MULTIPLAYER
Up to six players play locally with at least one VR headset and connected smart devices, this offers an experience much like the original Spaceteam game. In the VR game each mobile player is represented by a robot.

SINGLE PLAYER
If you don’t have any friends around or theres no one online you want to play with head to the Practice Mode and you and two of our trusty robots will form your Spaceteam.