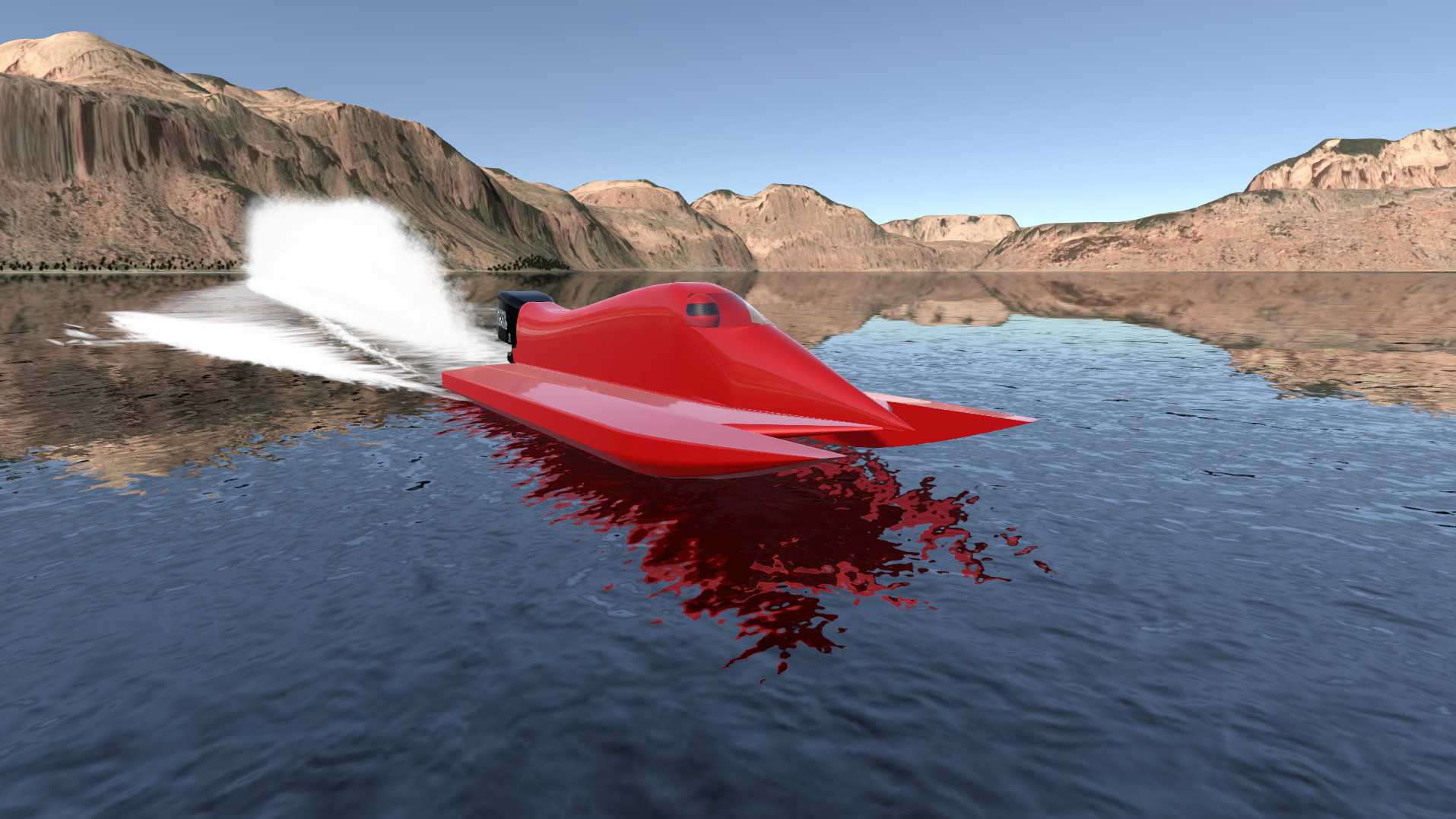 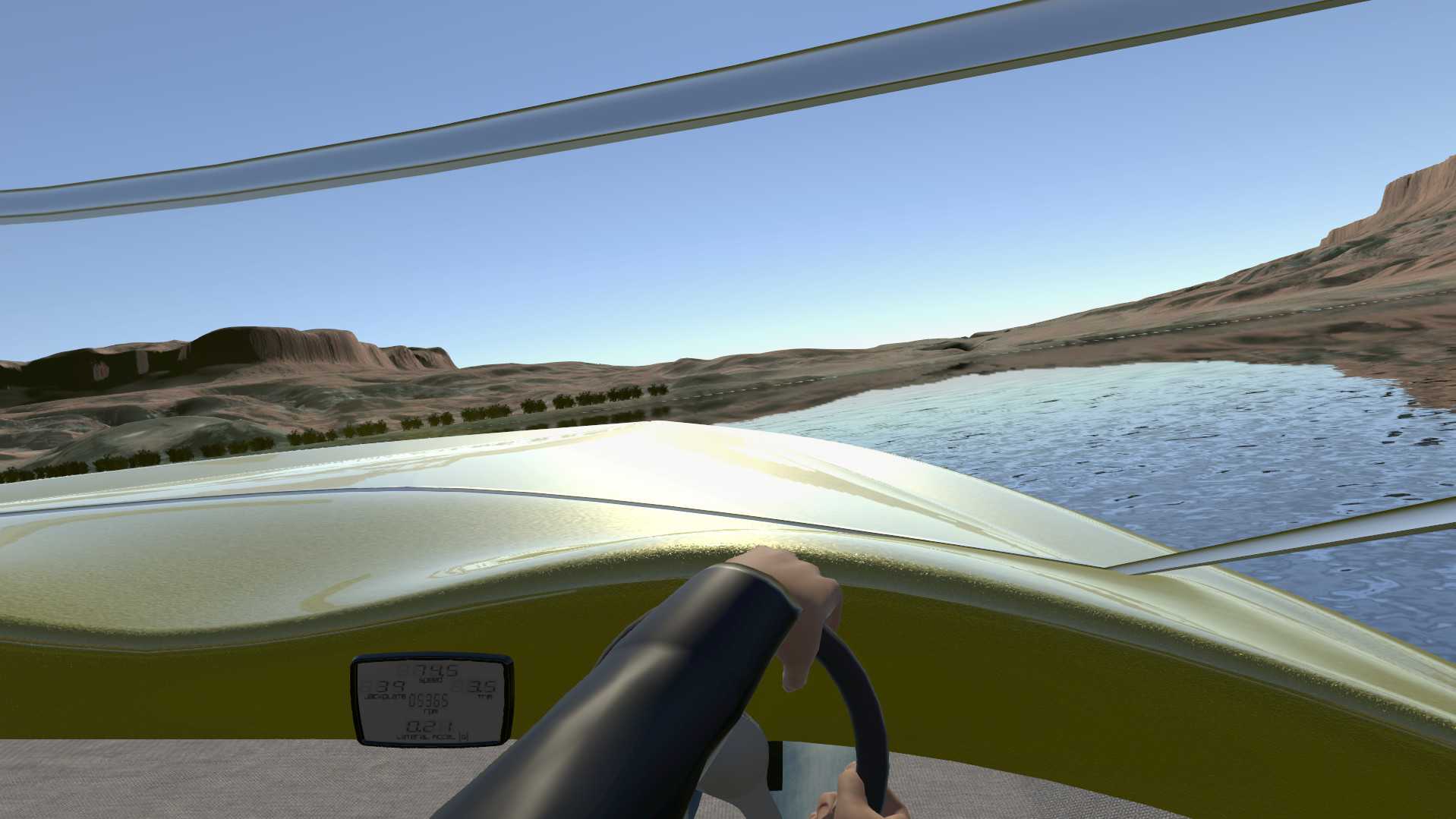 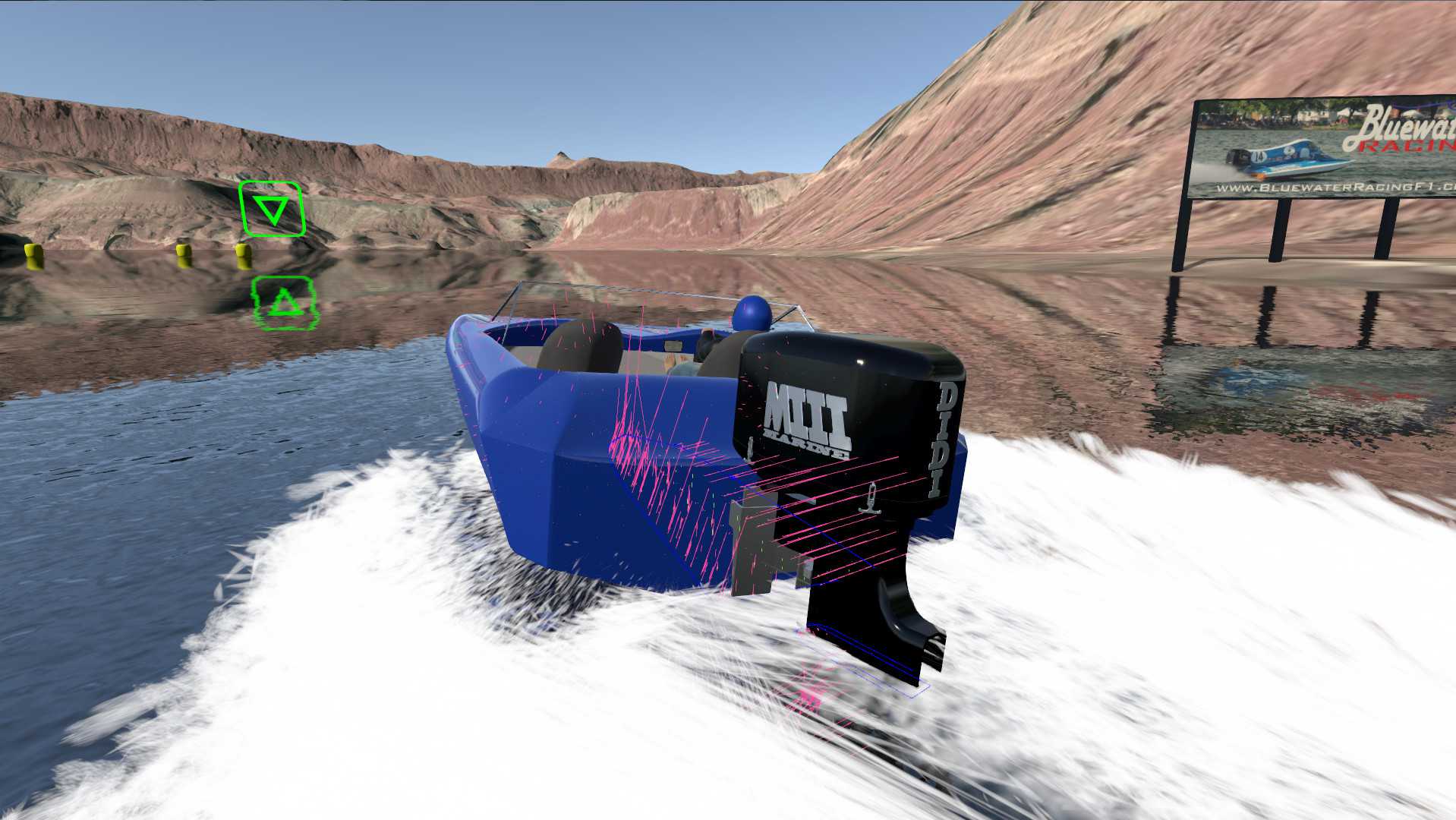 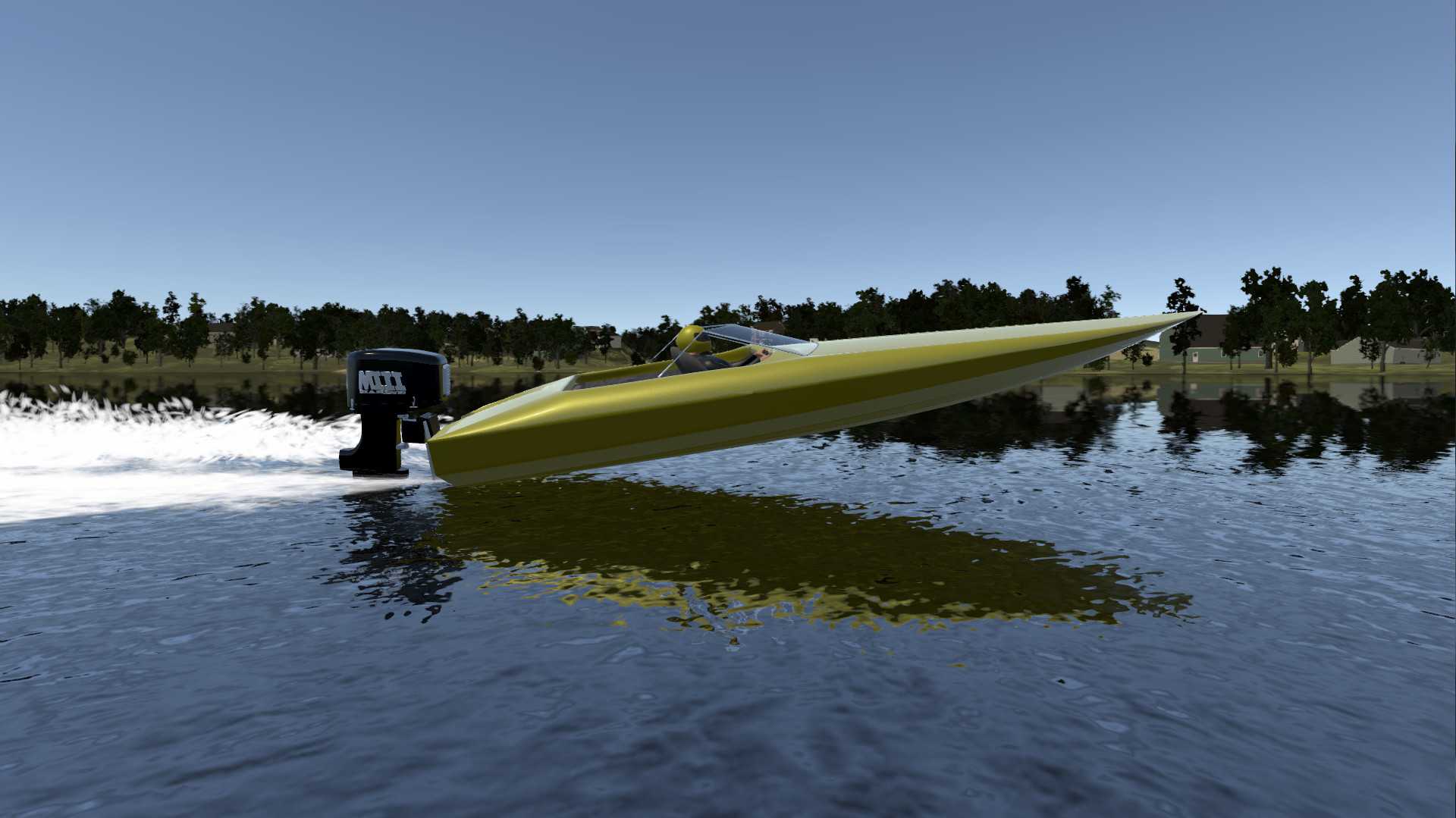 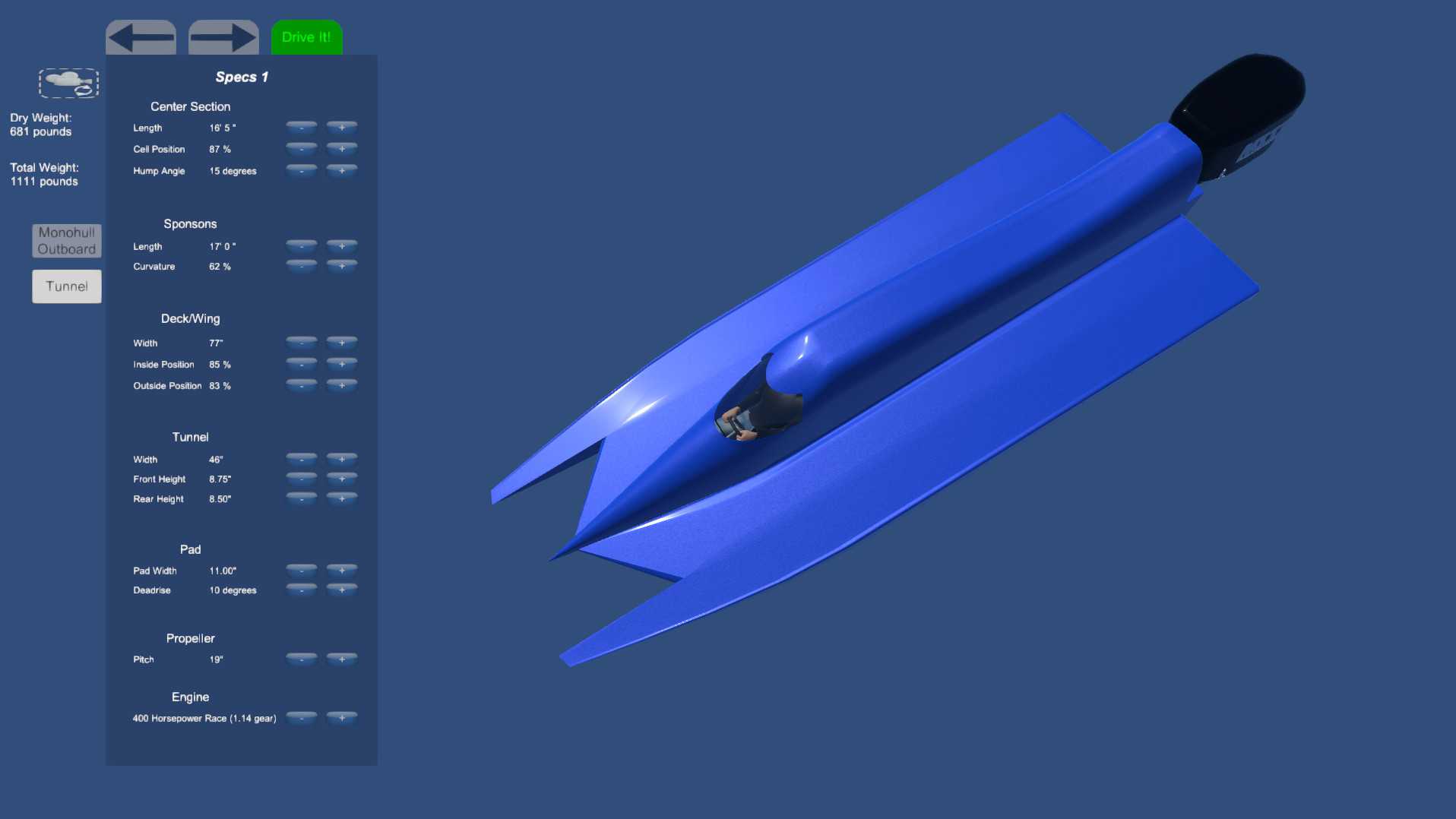 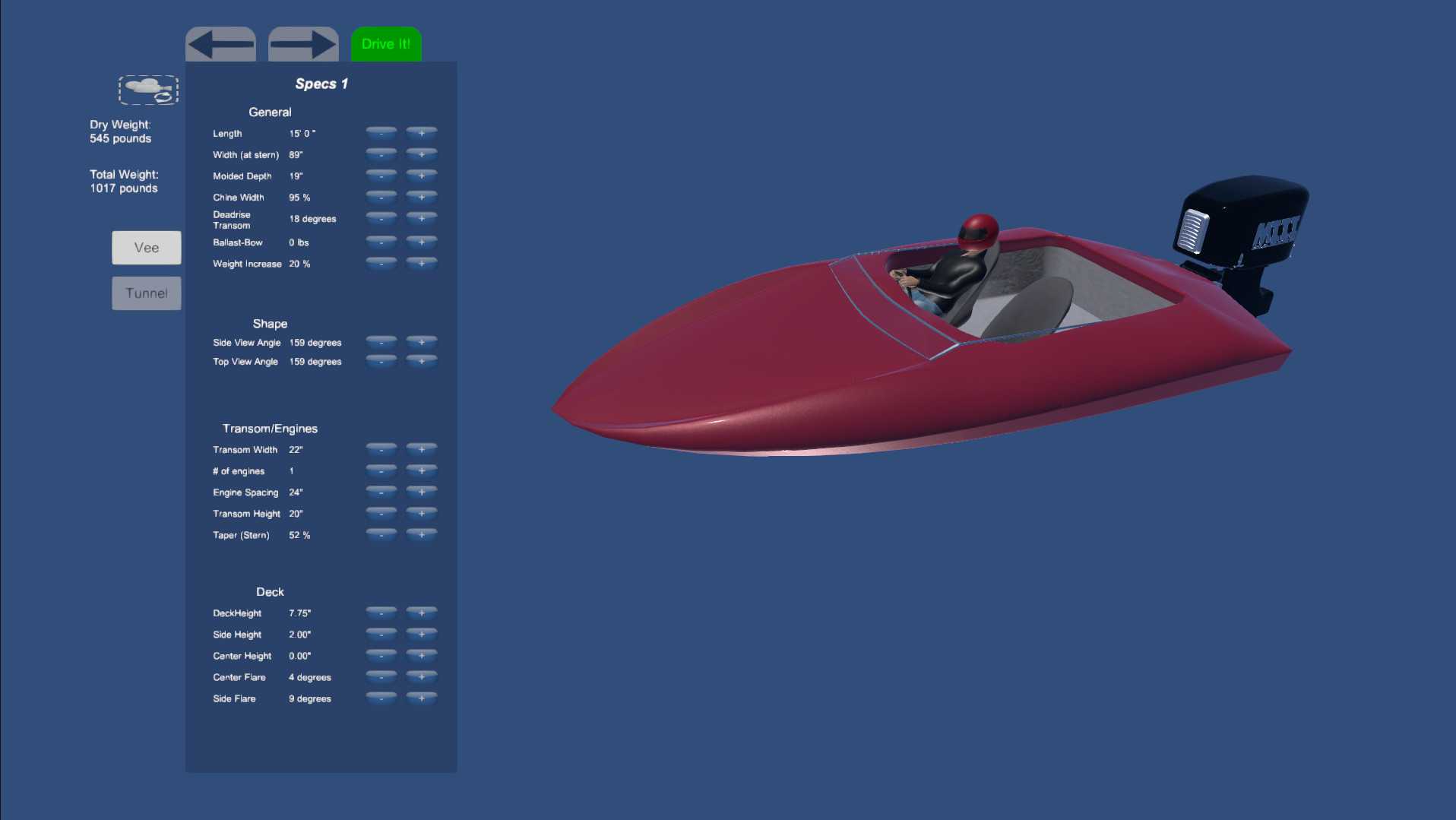 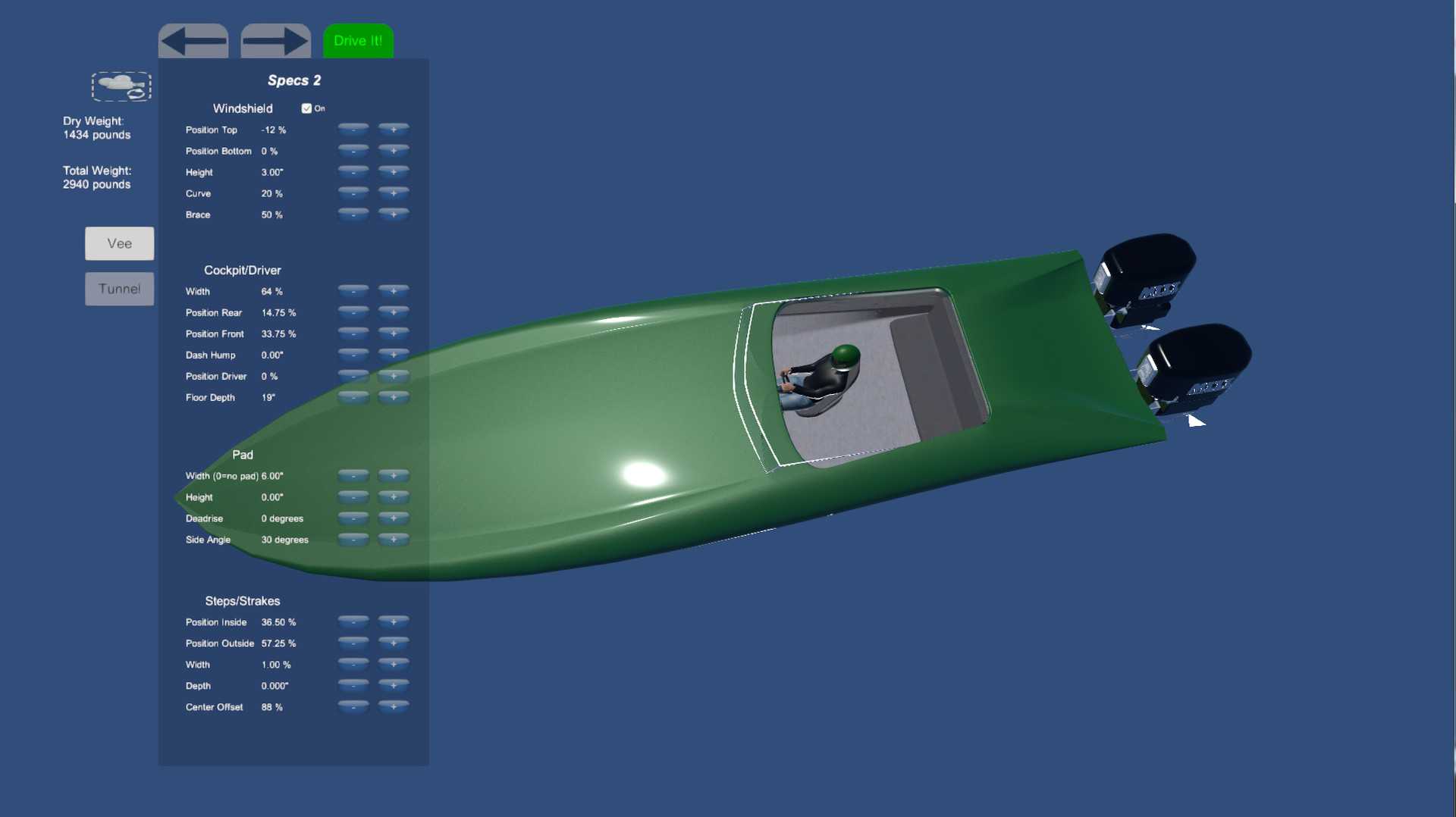 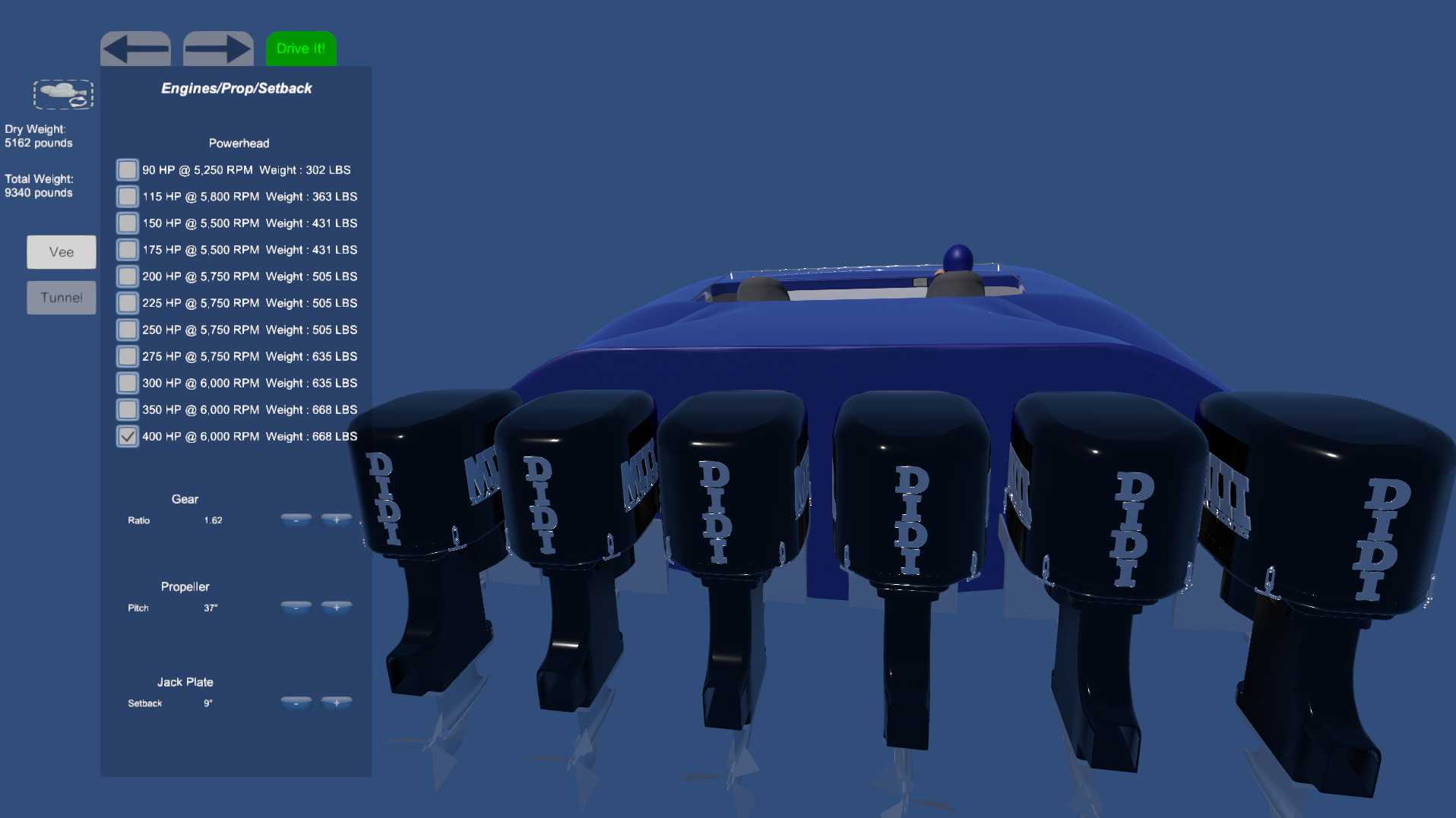 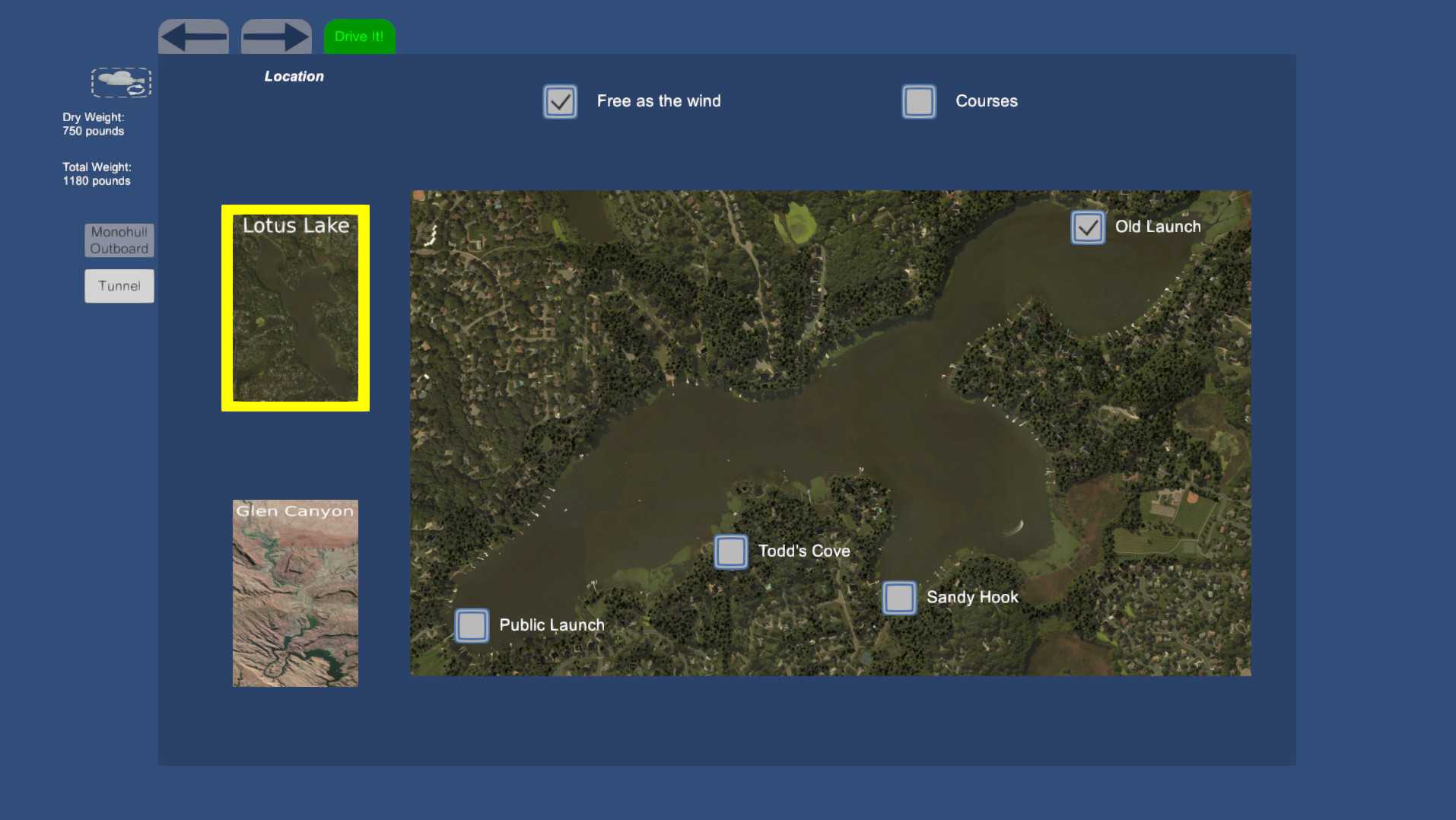 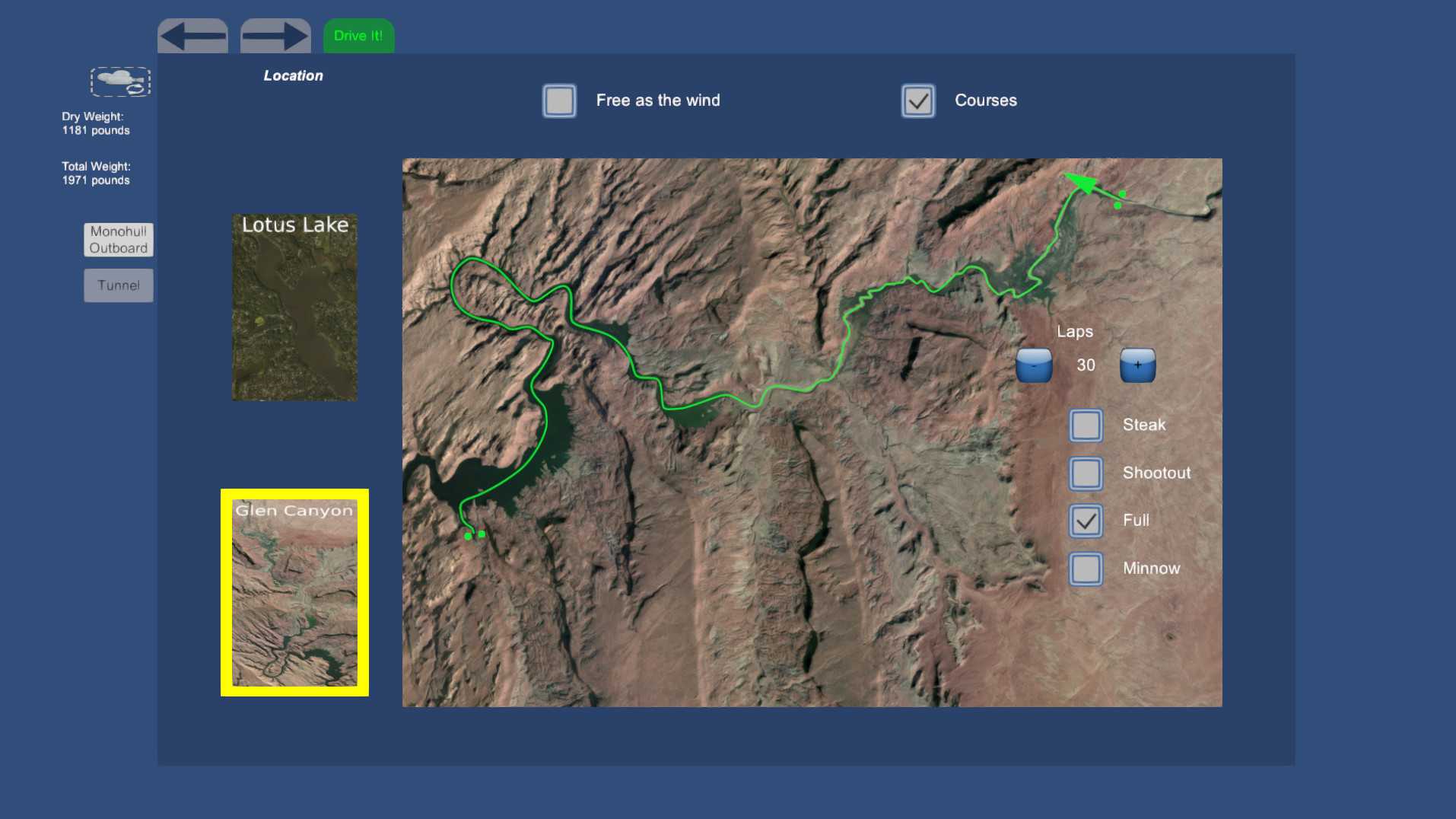 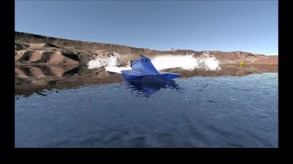 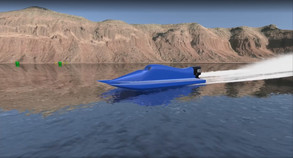 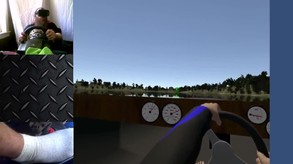 VEE HULLS HAVE BEEN REMADE FROM SCRATCH (released as a free update on Feb 19, 2017)

"Design it, Drive it: Speedboats" is a speedboat simulator with high fidelity physics that lets you design and drive your own speedboats from dozens of adjustable parameters on a Windows PC, then compete against other players via leaderboards in top speed shootouts, solo time trials on lapped or point to point courses, or just free drive as you please to explore the world and your design's handling characteristics with no constraints. Whether you end up with boats that are slow, fast, turn well, chine walk, or tend to blow over at high speeds or not depends on what you do with the shape and design of the hull.

This is not your typical boat game. It's more of a design tool and physics sandbox/waterbox, a serious, hardcore simulator used by real life boat racers around the world including Formula 1, 2, 3, 4, 5, offshore powerboat, and other series racers to keep their skills sharp between races and train muscle memory. Real life high performance boat driving skills such as chine walk control and engine trim management can be learned safely.


Real life marine engineers and boat designers use this to experiment with ideas and get a better intuitive feel for how various design aspects influence boat handling and performance. The force vector view (accessible with the TAB key) is useful in examining exactly why the boat does what it does (see pic in screenshots). Dynamic instabilities can be examined in real time as they're happening, and the exact water/hull wetted contact shape and size can be viewed through the hull in real time.

This product is under ongoing development. The main priorities right now are adding more types of boats and getting the HTC Vive supported. (Oculus Rift is already supported). The best way to keep tabs on development progress and news is to join the Facebook group: https://www.facebook.com/groups/405024603032224/

Currently there are two basic hull types that can be modified to produce your custom hull designs:


The vee hulls have more than 40 adjustable parameters you can play with that affect not only the boat's appearance, but also have a significant effect on all aspects of performance and handling. Most of these can be viewed in the screenshots section of the store. The tunnel hulls are also adjustable.

The boat mesh is generated procedurally (mathematically) from the design parameters you specify. The physics computations (thousands of forces) are run directly on the resulting hull geometry from your design. As a result, all adjustable parameters affect the handling and top speed of your boat in much the same way they do on real boats.


The physics code/vehicle simulation model driving all this is a proprietary system that solves thousands of hydrodynamic, skin friction, buoyancy, and aerodynamic forces separately on almost every triangle in the boat mesh, lower unit, and powerhead as well as the individual propeller blades. A force vector view (TAB key) will display many of these forces so you can see exactly why the boat chine walks, porpoises, and turns well (or not), as well as showing which area of the hull is in the water at any given instant in order to guide your design decisions and help you understand why your design behaves the way it does.


Steering wheel force feedback (if you have one, not required) is fully modelled with many of these same forces and torques.


Are there more real life locations you'd like to see added to the simulator? Post them here!

Courses are open water circuits on the Lotus Lake and Glen Canyon maps marked by buoys the same way it's done in real powerboat racing (red buoys are for right turns, yellow buoys are for left). As of August 4, 2016, all non-top speed shooutout courses have leaderboard functionality added that will display your rank, best ever laptime, last laptime, best session laptime, and world record laptime every time a lap is completed.

Do you have course layout ideas for the existing maps or real world map locations you'd like to see added? Suggest them here:

You're not restricted to driving on courses, however. Just choose "Free as the Wind" mode and drive anywhere you want. A lazy run down Glen Canyon with no pressure can be surprisingly relaxing, especially in VR.

The best setup is a force feedback steering wheel + pedals with a mouse and keyboard within reach.

This solo indie project is under continuing development by Todd Wasson, formerly the physics engine programmer/vehicle dynamics engineer behind Virtual RC Racing and it's successor, VRC Pro. Todd has been writing physics engines and vehicle models since before 2000 and specializes in vehicle dynamics.


Audio was created by Greg Hill of Soundwave Concepts, the master car engine audio developer behind iRacing and many other sim racing titles.

The outboard engine 3D model, helmet, and billboards were created by Morgan Williams of Bluewater Racing F1 (https://www.facebook.com/bluewaterracing/). A real life F1 boat racer, Morgan was instrumental in guiding the tuning of the default tunnel boat so its handling could be made as realistic as possible. Judging by the number of other real life F1/F2/F3/F4/F5 and other race drivers now using the simulator for practice and entertainment, it appears this mission was accomplished. Thanks, Morgan!